Hello everyone!
This month, we’re talking about Orphan Age and Orphan Age: Diaries, sales and discounts, and, of course, we’ll share our progress on Seers Isle!

As you may have heard, our good friends and fellow game developers Adrien and Maxime from Studio Black Flag are doing a Kickstarter campaign to support their upcoming game Orphan Age.

Orphan Age is akin to The Sims series but transposed into a cyberpunk civil war where the children have been left behind to fend for themselves in a derelict part of a claustrophobic megalopolis. We think this game is really promising and we strongly suggest you take a look at it and, maybe, consider participating in the campaign.

In fact, we love the game so much that we made a companion storybook called Orphan Age: Diaries. It’s a short interactive graphic novel that follows a group of orphans and tells you a bit more about the universe. Orphan Age: Diaries is available now for a limited time as one of the rewards for the Orphan Age Kickstarter.

Here’s a couple of images from Orphan Age Diaries: 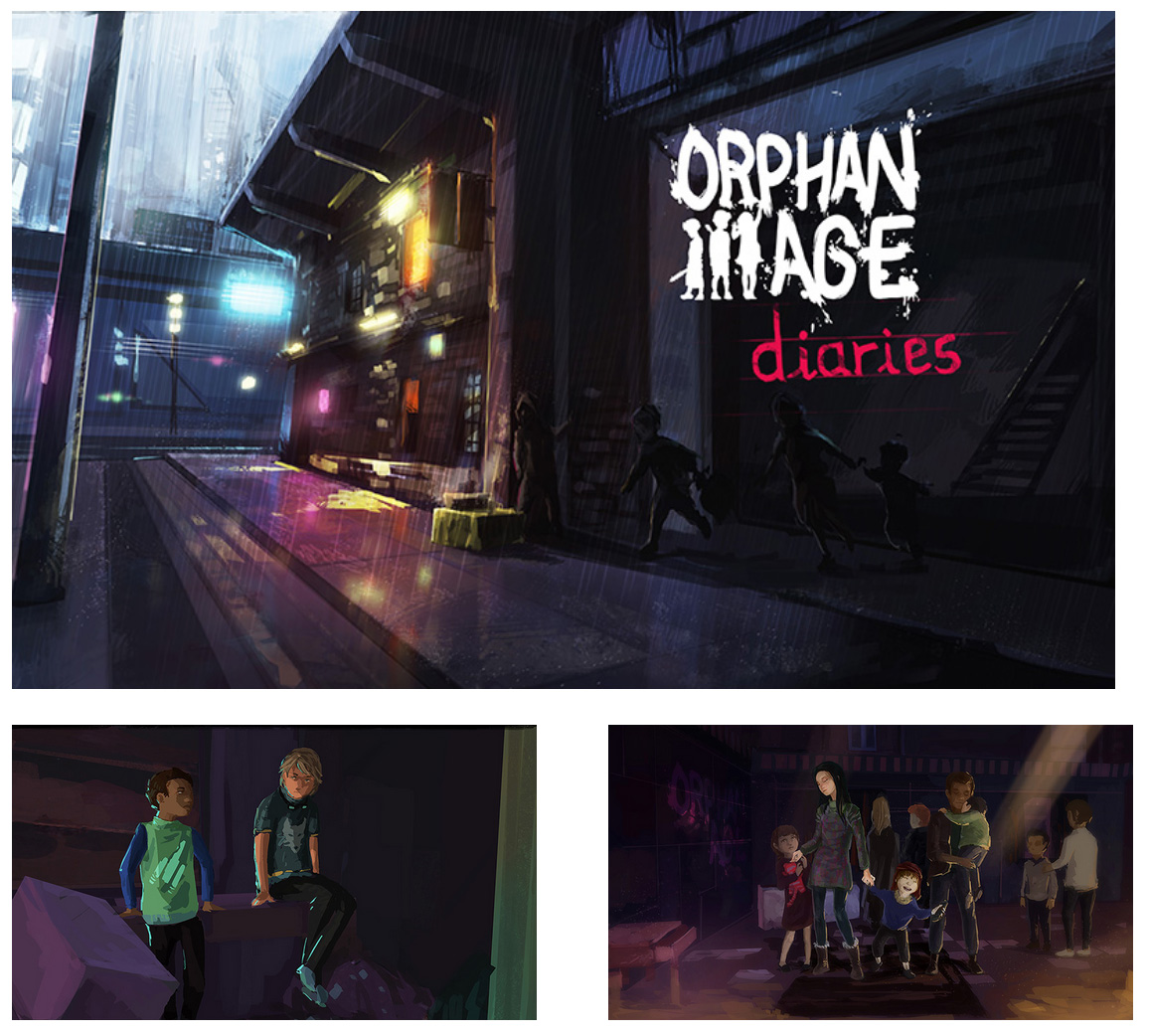 Before moving forward, I would like to give the pen over to Nico who has some personal things to say about Orphan Age, and why he decided to give some of his time and talent to this particular project:

I wish I could explain how I feel about Orphan Age.

At this time, people are suffering in wars, fleeing their very homes to survive. If they are lucky, they end up stuck in a boat or in a camp where they live in tents. While these tragedies happen, children are born and raised. What will their hopes and aspirations be? Between revenge, fear, and loss, can we guess what their world will be?

Orphan Age brings these questions to our western cities. It brings these questions to me. My kids are at the age of drawing. They draw animals and things… like snails, grass, sea, clouds, birds (lots of birds actually), bees and fish… Things that I can’t guarantee will still be around when they will be grown-ups. Mostly, they draw their home, the world as they see it. But I know there is a chance that their home will become an awful mess very soon. A mess with no birds, no bees, no Mom and Dad. The roof and walls replaced at best with a paper-thin tent cloth. This terrifying thought strikes me now and then when they bring me one of their colorful, innocent drawings.

At the same time, I can see how children are able to adapt. It’s fascinating. This is a very simple and profound joy in my everyday life. I watch them capture the world. I can almost feel it getting into their head, becoming thoughts, mental pictures. They take some time to acknowledge a situation and then, voilà: the whole thing is accepted and it’s now making sense! It’s like real mind-blowing magic every time.

Yep, children can be tough, maybe tougher than adults when it comes to adapting to a new situation, and at the same time, they are obviously very, very fragile. It’s a delicate, perilous edge. Orphan Age is a brave enough game to try a walk on this edge.

As I’m writing these lines, Orphan Age is still a couple of thousand dollars short of reaching their funding goal. There are a few days left for you to pledge, so please follow this link for more information:

Steam Summer Sales started last Thursday. It’s this time of the year when PC players around the world lose their minds and their wallets, so, if you haven’t played it yet, please note that Along the Edge is 30% off until July 5th on Steam.

Speaking of that, now seems like as good a time as any to talk a bit about our discount policy. As you may have noticed, we’re quite conservative when it comes to discounting our games. Along the Edge was released about two years ago (June 14th on itch.io — happy birthday, Daphné!), but we never went lower than 40% off. We plan to keep it that way.

We know that we’ve entered an era where people only buy stuff when there’s an attractive green tag on the corner saying -xx%! and it tends to create huge biases in the perceived value of things. We strongly believe that pricing reasonably and discounting reasonably is the right way to do it. Making a video-game is a labor of love and sweat (and gallons upon gallons of the darkest brew of coffee, at least for me), and we fiercely stand up for the intrinsic value of the work we’re doing.

So, we’re planning to stick to this policy for the foreseeable future. Seers Isle will be released at the same price tag as Along the Edge and will receive moderate discounts during sales periods.

Of course, we’re always open to discussion! Here’s our mail if you need it: contact@nova-box.com

It’s been a busy month for everyone. Camille and Julien have finished recording the musicians this Sunday (I’m quite eager to listen to the result, as they seemed really enthusiastic about it already). Nico and Ambre have done a fantastic work on chapters 3 to 5, which are almost complete illustrations-wise. However, there’s still a lot of work to do since we’re trying to have a first version of all the images in the game by the end of July. 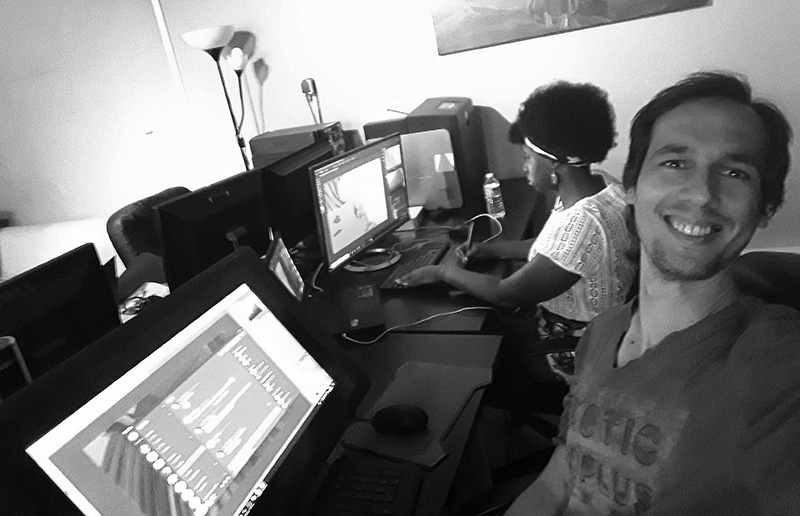 Yep, that’s a selfie of the art team. 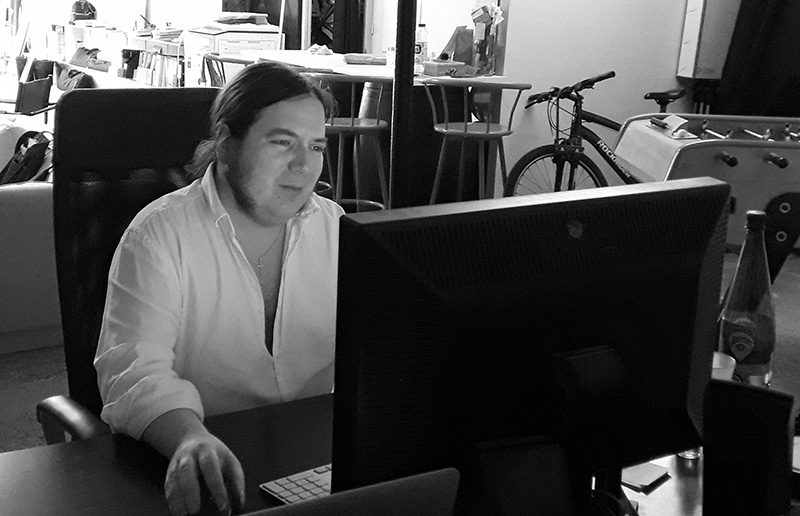 Nico managed to take a decent snapshot of me, so there you go:
here’s a rare picture of Geoffroy working.

As for me, at long last, I finished the first draft of the text all the way down to the eight main endings. So, for the next couple of months, I’m going to focus on polishing the game, making cuts and expanding on some of the scenes, placing text bubbles and fine-tuning dialogue, while making sure that everything remains bug-free under the hood. Still a long way to go, but it’s very exciting to see things fall into place.

Here are some images Ambre has done for us. Needless to say, we’re very pleased with her work:

Here’s one more image, because we feel generous today. We believe this one elegantly sums up what Seers Isle is all about: 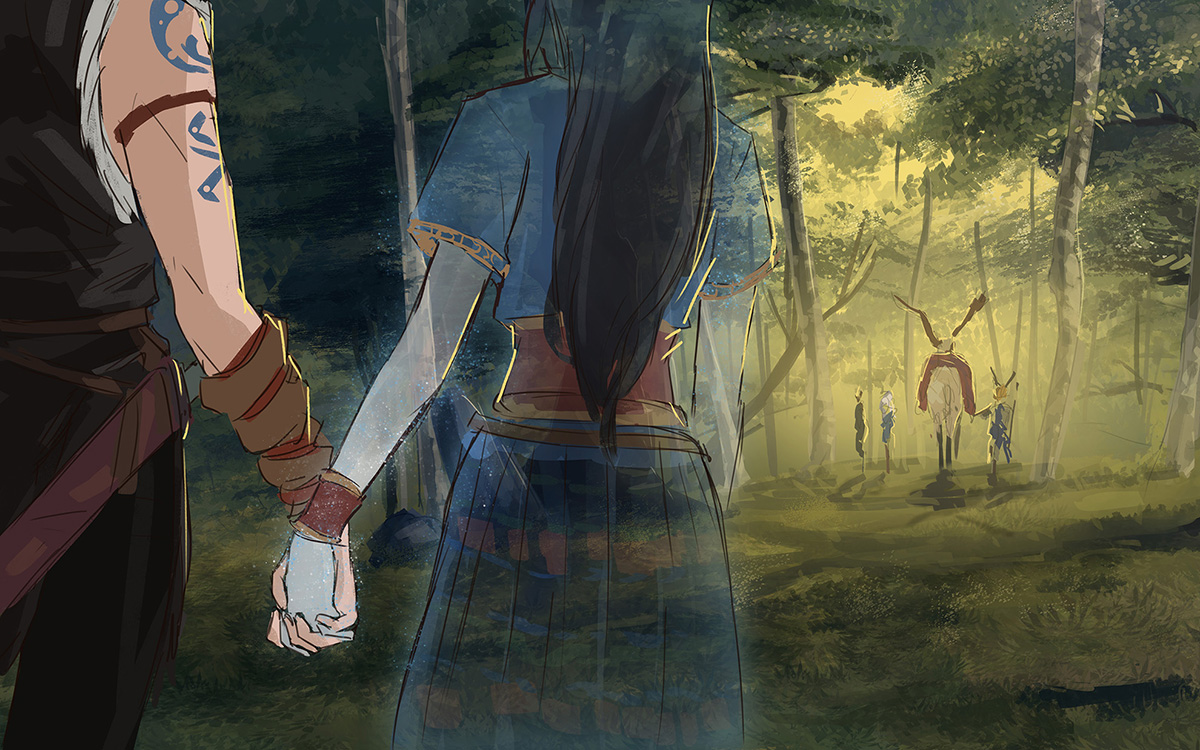