First of all, we would like extend our best holiday wishes to all of you, dear readers.

In this month’s issue, we’re talking about the awards received at Indie X, our ongoing winter sale and the price adjustments that are coming up early next year.

As always, we’ll finish with an update on End of Lines production, along with a new illustration from the game, so keep on scrolling!

So, last month, we had the chance to take part in Indie X, the biggest indie games festival in Portugal, where End of Lines received a nomination for “Best Art Direction” and won the award for “Games for Good“. We’re very proud to have received both those distinctions.

And if you missed it, our IndieX livestream is available for replay on Youtube, where we go in depth into the artistic statement and game development of End of Lines. Big thanks to Patricia Casaca who was a wonderful host!

Price adjustments are coming in January

Let’s do the classic “I have good news and bad news” routine, shall we?

Let’s get the “bad” news out of the way first: Steam adjusted the recommended prices conversion earlier this year, and we haven’t applied them on our catalogue yet, but we’re planning on doing it early next year, once the current Winter Sale ends. That means that the prices of our games will go up in certain regions.

Also, as you may have noticed, two-digits inflation has made a nasty comeback in Europe. That means each sale we make returns less value than it did in the past. To give you an example, if we only needed to sell six copies of Across the Grooves to pay for a kebab for each member of our team in the past (these are not real-life numbers, just an example), we will now need to sell seven or even eight copies of the game for same number of kebabs, because the price of kebabs went up with inflation, while the price of our games did not (yet).

That’s why we’re also planning on updating the base price of our games from 12.99€/$ to 13.99€/$ on Steam and other resellers. On the other hand, prices for the Nintendo Switch versions won’t change for now.

We know that this may seem like a very peculiar decision, but we really hope you’ll understand why we’re trying to approach things differently.

Well, the good news is that we’re making our the biggest discount to date on our full back catalogue, with 35% off on all our titles. This discount is already running on Steam and on the European Nintendo eShop. The American Nintendo eShop will follow early next year. So if you’re on the fence about diving into a Nova-box game, now would be a great time to do so.

On top of that, you can get an extra 10% off with our permanent “complete your collection” bundle on Steam. Follow the nifty link here below, it will point you in the right direction:

Buy the Nova-box collection on Steam

So, to sum it up:
— the base price of our games will go up 1€/$ next month to counter inflation,
… but:
— we’re currently running our biggest sale to date, with 35% off across the catalogue.

We’re currently in the midst of our “friends & family” closed beta, and the first waves of feedback we’ve received are quite encouraging. We’re very grateful to our testers for their time. Thanks to them we will have a lot of adjustments and improvements to implement into the game next month, once the beta session is concluded.

On the art side, Nico and Julie are still upgrading all the illustrations from placeholders to finished art pieces, and they will be doing that for the next couple of months, since there’s a lot of images to behold in End of Lines (we’ve passed the 1000 visual assets for the first time, and by a good margin). All in all, we’re still on track for an early-ish 2023 release, and we’ll keep you posted once we know more, of course.

As always, let’s conclude with this month’s illustration, where the hardships of the trail get metaphorical. 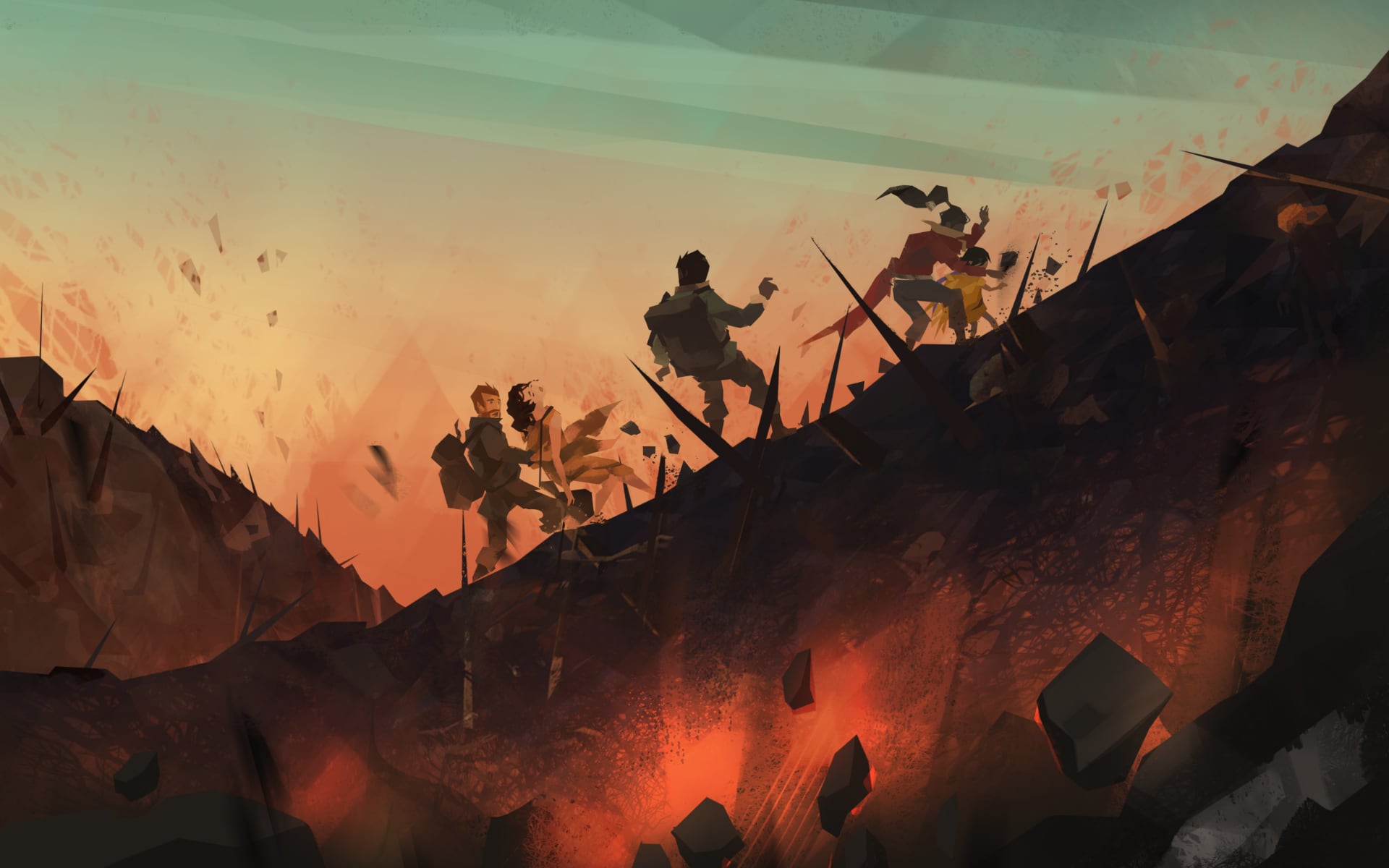 That’s all for now, see you next month!

Please consider adding End of Lines to your wishlist on Steam! (it helps make the game more visible at release).

And in the meantime, Seers Isle, Along the Edge, and Across the Grooves are available on Steam and itch.io (among other select digital resellers).